Random writings on running, software & product development, business and anything else

The AMA championships are over for another year. This year was Perth, the weather was great, the track was fast and the meet ran smoothly.
Already this season, some fast 100m times had been run at the new WA Athletics Stadium, by Patrick Johnson 10.18 and Aaron Rouge-Serrett in 10.17. So I was looking forward to this. I have been told it is a form of Mondo, but the track only has a 3 year life span.

Not a great preparation for the first day of comp, with a 4am wake up for a 6am flight out of Sydney to Perth. But hey, thats the way it goes.
Well the wind gods were with us all 4 days for the sprints. Sometimes a little too much.
The tail wind was 4.1 in the 60m, so the 7.06 will not count as a national age group record. 3rd time that has happened this season. That time is a tenth of a second faster than I have ever been electronically timed over the 60m.
My 100m time of 11.17 (w+1.3) was a season best, and felt really good. I was starting to really like this track.
Day 2 and the 200m was late in the afternoon. I was hoping for better than 22.68 (w+2.0).
Day 3 and the 400m. Well a strong home straight tail wind means a nasty back straight. And given I had qualified for the Champion of Champions sprint 30 minutes later, I decided to drop the 400m. This was the first time I had made the Champions race in 4 years of AMA Championships, and it was a real honour to be there. The Champion of Champions race is a handicap race, where the handicap is based on the runners age, and for the 10 best age graded results from the 100m. Off 3.3m, and giving the front marker nearly 20 metres I had no real hope to win. With the front market in the outside lane, and myself in lane 1, it was only in the last few metres that I could clearly see the outside three still clearly in front of me. Very happy with 4th. 10.71 (+3.2) for 96.7m.
My squad mate Kylie Strong was second in the female champions race, after also being the back marker.
For once we put in a good relays performance. Comfortably winning the M170 4 * 100m, but well beaten into second by a strong Victoria team in the 4 * 400m.
Full results are up at the AMA site.
Had a great time at the track, and met more of the organisers who I previously only communicated with by phone and email. A number of people were complimentary of the entry system that I had created for AMA.
The only downside of the meet, was the lack of numbers in the M35 sprints. Hopefully that will improve next year in Brisbane, but unlikely.
Some photos below. The sprint champions photos come from the MAWA gallery by David Cane on day 3. 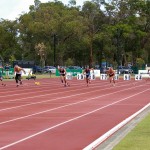 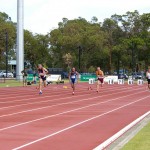 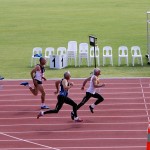 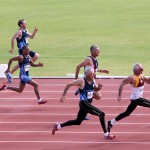 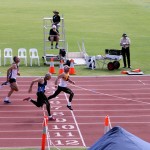 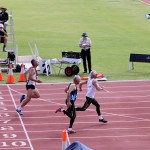 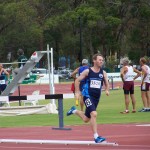 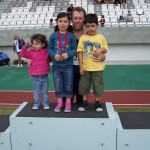 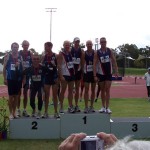