Random writings on running, software & product development, business and anything else

Packed the family in the car last Saturday for a night stay in Newcastle, and a couple of races at the Hunter Track Classic.

This was the first time I had run on the Glendale track, which they built just after I finished uni in Newcastle. The track is fine, but with no warm up track, all the warming up athletes are crammed into the back straight. 2 masters events on the programme (60m & 1500m), along with a numerous open, junior and 1 pro race over 300m.
I have been thinking about doing pro races for a while, so I decide to enter the 300m. Give I run all my races in lanes, it was unusual to be out of lanes, and I only just scrapped into the final after being 3 wide around the bend. With another runner on the same mark, and another 2m ahead, I decide to take the conservative approach in the final. In the end I finished 4th or 5th, but not far behind the winner. Another few metres and it would have been a much better place. But hey, $70 more than cover the petrol money, and I will definitely give the professional running scene another go. Congrats to Andrew for winning the big money.

The masters 60m was half an hour after the 300m heats, and my head was still pounding. Unfortunately only 3 of us entered, and only 2 started. We masters often complain about lack of races at these types of meets, well with such a small start list, I would be surprised if ANSW put masters sprints on a future program.

The next day I took the opportunity to drive the family around the old haunts from my uni days. Some places have improved, while others have been neglected since. Newcastle still has a bad reputation, based on coal and the old BHP iron works, but I think it still has great potential. Big enough to have most services anyone could want, and close enough to Sydney for the rest. Beaches, good transport, space, lower traffic. If the right employment opportunity ever came up, I will give it very serious consideration.

Photos from just after the finish of the 300m, from the Runners Tribe site. I am in yellow. 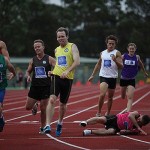 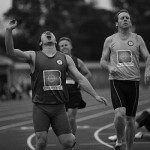