Random writings on software & product development, running, business and anything else

I admit to using the Opera browser

When I do web development, my browser of choice is Firefox. With geat extensions like Web Developer, tracking down HTML / CSS issues is made so much easier. There are plenty of others like Live HTTP Headers and Search Status to name just 2.

However when I am just browsing the web, my browser of choice is Opera, and has been for a while now. Performance wise I have found it better than firefox. This is just a perception, without any rigorous analytics. part of the answer is probably to do with FF being slowed down by the installed extensions. Remember I am running Linux (Ubuntu), so Safari and Google Chrome are not available at this time. Konqueror is a good alternative when I was on KDE.

Yes Opera is not free software, just freeware, but for me in this case, its the best tool for the job.

For many years I have disliked JavaScript, and avoided its use unless absolutely necessary. This goes back many years from some of the atrocious things JavaScript was used for on the web, and the mess of a language it was to use in early web browsers. About 2 years ago I gave it another look, but all my dislike was confirmed by a terrible book I had purchased. I will not name it, as I am embarrassed actual money was handed over.
END_OF_DOCUMENT_TOKEN_TO_BE_REPLACED

A major challenge of web development is that a particular OS and browser of the end user is not guaranteed, and so many must be catered for. This is not as bad as it used to be, now that Netscape 4, and Internet Explorer 5 and earlier have been consigned to history. This leave IE6, 7 and soon 8, Firefox, Safari and Opera. That is still plenty of scope for variation, and the general problem is IE6. So the decision by 37Signals to discontinue support for IE6 in mid August is an interesting development. It is also a bold move, but that is the way 37 Signals so things, by not catering to the entire world.
END_OF_DOCUMENT_TOKEN_TO_BE_REPLACED

I have my tickets for Web Directions conference

For the last 2 years I had planned to attend the Web Directions conference in Sydney, but various work and family commitments have meant this has not happened. Well this year there are no excuses, and I am there. I have signed up for the 2 day conference plus ‘Javascript – The Good Parts’ workshop by Douglas Crockford. From a front end perspective, Javascript is my relative technical weakness, but something I am looking to fill in, now that I have moved past my all javascript is evil mindset.
The one problem I do have with the conference program is that I know there will be clashes between presentations I want to see, as it is divided into 3 tracks, and my interest crosses all 3. But what a problem to have. The presentations I am most looking forward to are : ‘Elegant Web Typography’, ‘Javascript libraries – Putting the cross in cross-browser compatible’ and ‘Web APIs, Oauth and OpenID: A developer’s guide’.

As a follow up to the recent post about the picoshot upgrade, I thought I would put down some observations about the spread of usage of picoshot around the globe in different languages.

The small amount of publicity about picoshot was all done in English, and on English languages sites. Initially the traffic was coming from Australia, USA, Canada etc, as might be expected.

A number of French language blogs, gave the service a write up (or so Babel Fish tells me, as I don’t read or write French). This was followed a couple of days later by lots of traffic initially from Spain, but then also other Spanish speaking countries, such as Mexico and Argentina. (I have a very basic ability to read Spanish). A third wave of traffic followed from Italy in the following days.

I have been hesitant to post comments on these non English language blogs, as I would have to post in English, and consider this almost rude. Native English speakers (such as myself) are probably missing out on some great ideas and feedback because of our general reliance on a single language, when technical people from many non English speaking countries can skilfully handle 2 or more languages.

UPDATE: the picoshot service has been sold and has new management.

This is web testing

Thought I would give a quick screenshot. Safari and IE6 browsers on Windows XP. All running with QEMU on Kubuntu Linux. 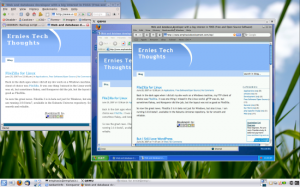 I should have shown Konqueror as well.

Often I read about the evils of duplicate content in a site, and the wrath Google will supposedly bring on your site if you don’t go to great lengths to prevent it. So it was interesting to read a post by Vanessa Fox on the subject at the Google WebMaster Central blog.
To summarise the 3 main points:

Duplicate content is a natural occurrence with blog systems such as WordPress, and I think Google is smart enough to understand this.

Now if you steal all your content from other sites you will be in trouble.

Windows within Kubuntu with qemu

The major hassle of doing web development on Kubuntu (or any non Windows system) is the inevitable hassles with the browser which still has the majority of users (IE6). Options to deal with this include:

All these options have disadvantages in terms of cost and/or time. Having tried most of them, I decided now was the time to try another option – virtualisation or running an OS inside another.
In this case I have started to run Win XP with Kubuntu. Again their are a couple of options, but I went with qemu. There are a number of good resources for this on the net including:

Here are the list of instructions I used for Win XP on Kubuntu Fiesty Fawn.
em1:~$ mkdir virtual_os
em1:~$ cd virtual_os
em1:~/virtual_os$ qemu-img create winxp.img 3500M[Suggested size seems to be at least 3 Gig.]
em1:~/virtual_os$ qemu -boot d -hda winxp.img -cdrom /dev/hdc -m 256 -localtime[The /dev/hdc will be specific to your setup. /dev/cdrom did not work for me. This will start the install from CDROM, and expect the process to take time]
em1:~/virtual_os$ qemu -boot c -hda winxp.img -m 256 -localtime[Once installed this is my command to run the guest OS. The number after -m is the amount of memory to allow the guest OS. If you have plenty give it more.]
And that was it. Internet connection was working straight off. Things are a little slower but using only IE it was workable. I just need to get used to Ctrl-Alt to break out of the guest OS back to my native desktop.

Things still to do:

Google has made available the beta of Google Gears which is describes as “open source browser extension that enables web applications to provide offline functionality using the following JavaScript APIs”.

END_OF_DOCUMENT_TOKEN_TO_BE_REPLACED

ALA (A List Apart) are running a first annual Web Design Survey. Its pretty quick to complete, with mainly radio button single choice answers, some multiple selection, and 2 free form text. Seems there is a random prize, and non US people are not dudded from it. Be interested to see the results that come from it.